On Fridays right here, writers talk about their books, their process, where they’ve been, and where they’re going. Today we celebrate LINCOLN COLE’S win on Kindle Scout with RAVEN’S PEAK, published by Kindle Press on July 5, 2016. 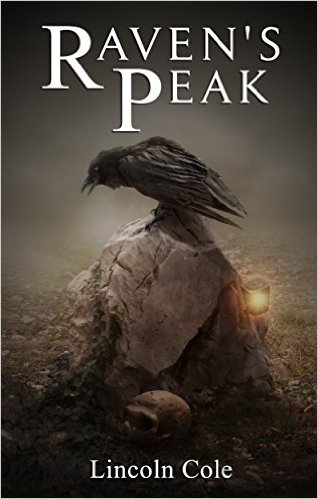 A quiet little mountain town is hiding a big problem. When the townsfolk of Raven’s Peak start acting crazy, Abigail Dressler is called upon to discover the root of the evil affecting people. She uncovers a demonic threat unlike any she’s ever faced and finds herself in a fight just to stay alive.

Abigail rescues Haatim Arison from a terrifying fate and discovers that he has a family legacy in the supernatural that he knows nothing about. Now she’s forced to protect him, which is easy, but also to trust him if she wants to save the townsfolk of Raven’s Peak. Trust, however, is something hard to have for someone who grew up living on the knife’s edge of danger.

Can they discover the cause of the town’s insanity and put a stop to it before it is too late?

I put a lot of work into my campaign. It was my second time putting an effort in for Kindle Scout, so I really wanted to hit the ground running. I did a lot of outreach on Facebook and used every promotional service I could find to push people to my campaign, and it worked because I was picked after only three days of waiting. The process has been slow since getting picked, so it’s forced me to sit back and relax more than I normally like to. The edits were amazing and made me really understand just how much an editor can do to make a story better.

Everything has changed since I received a product page from Amazon, though. Now I have a real place on Amazon to direct traffic and it feels more real. I’m trying a bunch of promotional efforts for this book launch to help what Amazon will be doing and, hopefully, it’ll take off!

I’ve always wanted to write an Urban Fantasy/horror/paranormal novel, but I was too busy with other projects to put the words on paper. I love supernatural stories, and I love thrillers and fast-paced action. I actually wrote the prologue for this as a standalone short story, and it completely took off in my mind as the world developed and it became a story that I needed to write. As soon as I put the name ‘Abigail’ to paper, the story wrote itself in only a few weeks.

I like to wander too much and put in extraneous details when I write, so this book helped me to pull back and tell a more consistent story. When I plan a story, I have huge ideas and scenes in my head that I want to reach, but getting my characters into the right place for the scene to work is difficult. I think this book helped me learn how to do that better. I also found out that my writing style for a first draft is minimalist, and I need to just push through to the action and get the scenes down on paper. I can fix things during the rewrite, but for my style I need to not worry about getting things right on the first try.

That first draft is brutal. I love to rewrite and watch a story come together and the pieces fall into place, but the first draft is never like what I planned and it can get depressing. I think that I’ve gotten better at not worrying about the first time through a story because I’ve seen my novels come together, so it isn’t nearly as big of a deal as it was when I started.

I have the next book planned out and I just need to find the time to write it. The third book has a concept in my mind and several scenes have been thought through, but I need to see how the second book goes before I write the third. Things change. I’m also planning on writing several short stories to bring back stories to side characters and develop the world more. I’m not sure if I’ll go past three books, or if it’ll be another series in the same world, but I do plan on continuing in the world after I finish this series.

One day at a time. Aside from getting a major publishing deal, writing is a long-term venture and takes a lot of work and patience. Each book, each promotion is like laying another brick in the foundation of your career, and hopefully one day I’ll have built a cathedral I can be proud of…even if it’s only two feet tall!

Lincoln Cole is a Columbus-based author who enjoys traveling and has visited many different parts of the world, including Australia and Cambodia, but always returns home to his pugamonster and wife. His love for writing was kindled at an early age through the works of Isaac Asimov and Stephen King and he enjoys telling stories to anyone who will listen.

Find out more about Lincoln and connect with him on:

We’d love to hear from you, so feel free to connect with LINCOLN here.