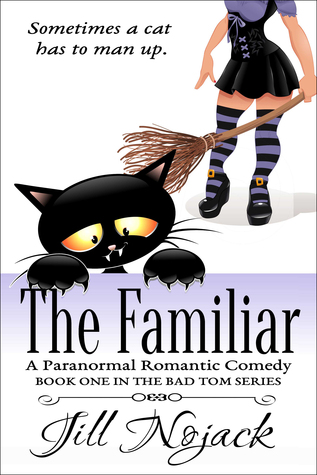 On Fridays right here, writers talk about their books, their process, where they’ve been, and where they’re going. Today we celebrate JILL NOJACK’s win on Kindle Scout with THE FAMILIAR, Book One in The Bad Tom Series, published by Kindle Press.

Sometimes a cat has to man up.

Tom has been mostly cat for a long time, but when the witch who enslaved him dies, he has one last chance to become a man again and maybe to find love, too. He just needs to tell Cassie, a sensible girl who knows nothing about the witchy business all around her, that he’s trapped in the body of the kitten she cuddles at night. But cats aren’t known for their conversational skills, and a powerful warlock is determined to take Cassie for himself. To make things worse, Tom is rapidly running out of lives.

I write Fantasy because I like having at least one universe I have some control over. Anything I can wrangle into that realm is a possible story for me.

As to The Bad Tom series—it happened on pure whim. I wanted to write something in a hot genre and see how it did; it was a challenge to myself in many ways. But it had to be something that I would love writing, even though I had a monetary intent. Shifters are popular, so I ended up writing a quirky story about a kitten-shifter and the witches who love him.

I’m sure it will become a trend.

If not, bear-shifters are massive right now. Because they’re big. And bigger is apparently better, or so they say. Looking at that the Nojack way, I’m thinking an elephant-shifter romance is up for me next. Or maybe a paranormal romantic comedy about a really sexy skeleton.

Once it was selected for publication by Kindle Scout, it taught me I need to have a little more faith in my abilities. Even though I have a small number of dedicated readers for my self-published YA series, there was always that not-so-little voice shouting at me from the other room that I’m not a real writer. Not really. Not up to snuff anyway. Seriously, I hate that voice. Now I can shout back, “Oh yeah? Well, I got an advance, buddy, so I must be a real writer!”

I don’t enjoy writing. Like Dorothy Parker, “I hate writing, I love having written.” I’m terribly perfectionistic. That makes the first draft of a book a chore. It’s also what makes me more proficient at drawing than painting. Pencils have those ever-so-handy erasers, but once you lay down watercolor or acrylic, it’s difficult to redraw without ending up with a mess. I really, really want to be a painter, but I have terrible difficulty finishing a painting. And I used to have the same problem with rough drafts. But now (with the help of NanoWriMo), I’ve learned to drive quickly through laying down the bones of the story without bowing to the pressure of obsessive nit-pickiness. But editing that rough draft into the final one? Easy-peasy. Because that’s where the magic happens. Once I have a rough draft completed, even if it has giant plot holes and lacks coherence, I’m golden. I can keep going for hours on pure flow without noticing the time passing. Because I completely dig making things better, perfect, whole.

I was born with stories, songs, and pictures in my head, and they have been jostling to get out of there since I was old enough to have the means to express them. There’s always an alternate world acting itself out in my head as I go through daily life.

Truthfully, when I get asked about inspiration and motivation, I’m not sure I understand the question.

Kurt Vonnegut. Maybe Terry Pratchett. For all of the obvious reasons, but mostly because we could have a rip-roaring good laugh about being totally wrong about the whole bright light thing.

Enjoying my efforts at the time I’m making them takes priority. Right now that’s writing. But it was music for a very long time and art for a couple years after that. If I could figure out a way to go without sleep, I would happily fit them all in on a daily basis.

I expect my career as a writer will continue pretty much like it is right now—I will continue to write quirky fantasy stories for a small but much appreciated audience.

Kindle Scout winning author Jill Nojack is a writer, musician and artist. She has rarely managed to make a living from the pursuit of her creative endeavors. Instead, she’s a corporate drone who stays up late to indulge her passion for writing, making music, and drawing/painting.

Way back in the long ago, Jill romped through a degree in English. She followed it up with a Master’s degree in Sociology. During her time at University, she served on the staff of the school’s literary magazine. She eventually stepped in to the editor’s role, where she made every effort to look like she knew what she was doing.

When she isn’t exploring her creative side, Jill enjoys laughing too loud and long in public and talking about herself in third person. She resides in the great American Midwest with a long-suffering, mean-girl cat.

Buy THE FAMILIAR and find out more about Jill on:

We’d love to hear from you, so feel free to connect with JILL NOJACK right here.