On Fridays right here, writers talk about their books, their process, where they’ve been, and where they’re going. James Morris’s WHAT LIES WITHIN, published by Kindle Press, was a Kindle Scout winner and launched to critical acclaim on June 2.

Shelley Marano is an ordinary, unexceptional high school senior…until the day she receives a cryptic text message, and her world tilts sideways. Now she’s in real danger, although she doesn’t know who would want her dead, or why. As she starts to unravel the mystery, the truth about who she really is proves to be more frightening than she ever imagined. With the lives of her and her friends hanging in the balance, one thing is certain:

Nothing will ever be the same.

That’s a tough question, because everything has been done. Everything. Every permutation of every possible plot. And yet, I write because it’s something I need to do; it’s my own little drop in the universe. And I think people read to connect. Yes, we read classics, but people also yearn to read what’s contemporary, what’s happening right now. So there will always be a need for a novel, that one-on-one relationship between writer and reader, which is so much different than TV or film.

I read across a wide range of books, but for better or worse, I generally write suspense, things I call “good yarns.” But if I’m writing something, I’m usually toying with a question in my own head: in WHAT LIES WITHIN, I was curious about identity – what makes us who we are? What experiences, and can we escape those things?

A lot, and not just about technique, or editing. I learned to keep pushing, to take risks (such as entering the Kindle Scout program); I learned that there comes a point when you can’t do more with a book – that you need to step away from it and move on. And I learned that there is a network of people who really do care and are happy for your success.

The best part of the campaign experience was the outpouring and willingness of people to help; the world can seem lonely and I sometimes wonder if I make any impact around me, so seeing people enthusiastically say yes was inspiring. The worst was the asking part. It’s sometimes hard to ask for help! 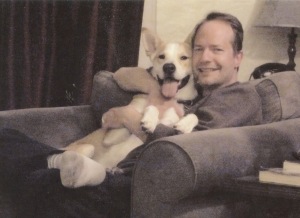 James Morris is a former television writer who now works in digital media. When not writing, you can find him scoping out the latest sushi spot, watching HOUSE HUNTERS RENOVATION, or trying new recipes in the kitchen. He lives with his wife and dog in Los Angeles.

Buy WHAT LIES WITHIN and find out more about Jim on:

One thought on “Writers Reach: James Morris with ‘WHAT LIES WITHIN’”